Where are the last two months’ reviews?  I’ll tell you: fuckin’ nowhere! Life is hard. Many, many things are total dogshit when it comes to life in 2020, but one of like four things that isn’t a complete, blood-shitting, teeth-grinding nightmare is being a kaiju fan! Holy shit there is so much going on and coming up! It even occasionally makes me hope that our inevitable extinction level event (be it a global ecological catastrophe, World War III, or uh tainted Moon water?) will hold off until…. maybe like 2022 or ’23 (tops).

For October I was considering doing a mini episode round-up of Ultraman Z, the current and absolutely excellent installment of the long-running Ultraman series.  Buuuut October also saw the birth of a cool new kaiju art challenge, Titanotober!  But it’s also been forever since I reviewed Ultraman ’66 episodes. But also also but I’ve been wanting to review Gamera vs. Guiron for like, the last year or so.

In classic Matt fashion I couldn’t figure out which one to commit to.  Throw in long hours at work, maintaining inter-personal relationships (that is, largely failing at maintaining said relationships), the chores and daily duties of everyday life, plus the twin siren songs of Animal Crossing AND Super Mario 3D All-Stars and you have a Voltron of responsibilities and distractions that’s better at eradicating free time better than actual Voltron is at killing off space monsters!

So what?  So this time I’m doing something a little different and dipping into a little bit of everything that’s swirling around in the kaijuverse… ESPECIALLY GODZILLA SINGULAR POINT HOLY FUCKING SHIT YOU SEEN THIS?!?!?!

If you haven’t, check it out! Then slap the “read more of Matt’s bullshit” button! If you want. You do you.  Self care, etc. XOXOXOX

END_OF_DOCUMENT_TOKEN_TO_BE_REPLACED

WE. HAVE. FRICKIN’. MERCH.  Like a real-life big boy podcast and blog! Our friend Mikey cooked up a KILLER logo for us and Ralph slam-dunked it onto Teepublic! Here’s a closer look at the sexy new icon! Roll that beautiful bean footage! 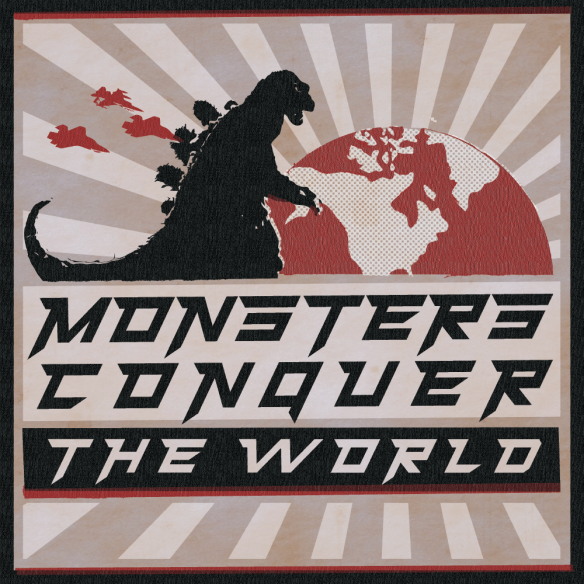 Teepublic gives you roughly a zillion different options, so head over there and slap it onto your favorite color t-shirt, some fun fridge magnets, or hell, a coffee mug that you use to discretely drink the official Monsters Conquer the World Cocktail out of!

Monsters Conquer the World Podcast crashes its bullet trains into Shin Godzilla! We’re joined by special guest Zach Bergman (aka Sour Gout)! Zach’s got a deep understanding of Shin director and Neon Genesis Evangelion mastermind Hideaki Anno; his career, his history in anime, and Japanese culture at large.  All pertinent stuff when you’re discussing a movie that’s got Anno’s ripe, powerful MUSK all over it like Shin G!

Matt and Ralph weigh in on the movie too of course, and we all pretty much have a grand old time yakking about this one-of-a-kind monster movie milestone. Plus we shine a searing purple laser on the (faux) Prince connection, Shin Godzilla’s roots in the 3/11 disaster(s), post-war Japan, otaku culture, hopes and dreams for the upcoming Shin Ultraman, Corporate Ralph, and of course, everyone’s favorite floppy bug-eyed baby boy, 2016’s brightest star, the precious and inimitable, Kamata Kun:

Hello my darling son. My perfect, wiggly boy. How is your neck-blood today?

It’s out on your favorite podcast catcher! Or you can hit up this lil’ link-a-rino too: https://www.stitcher.com/podcast/monsters-conquer-the-world. Hope you dig it and have a fun-tastic Labor Day weekend!

Monsters Conquer the World Podcast is back for more Godzilla (but it’s only Godzilla if it comes from the Godzilla region of France, otherwise it’s just sparkling kaiju)! This time we’re digging in to 1972’s Godzilla vs. Gigan, a wacky tag-team rock ’em sock ’em epic about a cartoonist, weaponized corn, and a misbegotten amusement park!

We chat about PERFECT PEACE, the fascinating secrets of pro wrestling, and loud chewing! Oh and of course, the fact that 90s sci-fi comedy classic Men in Black ripped this off pretty much from top to bottom.

Hit up your favorite podcast app to listen in or just smack this link-a-rino:

Some thrilling news too: if you become a Patron at our brand new G O D Z I L L A tier, you can actually pick what we yap about for an episode!  WHAT?! Have we like, FULLY baked our noodles here?  MAYBE! Zip-zap-zop on over to our Patreon page for all the diggity-deets!  As always, hopping on at the El Chupacabra tier grants you access to our top secret shadow episodes–full bonus episodes that drop right alongside the normal ones! It’s very Us of us.  This time we chat about Crawl, the recent ‘gator flick!  Enjoy! 🐲🎧

Holy goddamn, guys, it’s here! It’s been here for a little while now!  Didja see it? If not, go see it before you read this!

Uhh, joke or not, you should actually totally see this if you haven’t yet. I mean I love kaiju shit more than most, but the J-Dub movies fucking S L A P. Totally pure, no bullshit, pedal-to-the-metal, balls-to-the-wall action/revenge movie paradise. 3’s got axes, horses, MORE dogs, Halle Berry with dogs, and of course, the universe’s favorite son Keanu doing all the Keanu junk we all love.

No of course I’m talking about Godzilla: King of the [MOTHER FUCKING] Monsters! It is… so much. The five year wait is finally over, and Big Fella is back on silver screens tearing shit UP.  By now you’ve probably heard a lot about KOTM–what critics thought, what box office bean counters thought, and you might have even already heard what my friend Ralph and I thought IMMEDIATELY after watching it.  But some time has passed, I’ve actually had a chance to process it, and I wanna REALLY dig into this mo-fo.  You know, do that old school MONSTERS CONQUER THE WORLD SHIT.

Are the critics right?  Are the fans right? Is it like a lot of things in life, something nebulous in the middle?  Did I ascend to the next plane of consciousness watching this thing?  Hop aboard the Argo, fire up the Orca and say hi to Kevin, because we’re entering the realm of GODZILLA: KING OF THE MONSTERS

END_OF_DOCUMENT_TOKEN_TO_BE_REPLACED

HOLY SHIT! Our friend Richard concocted a cocktail inspired by the podcast and our BURNING love for monsters! Straight scoop from the mixologist’s mouth:

“My buddies, Matt and Ralph have a cool new podcast called Monsters Conquer the World. To commemorate their new adventure I created my first ever cocktail. I call it the King of the Monsters. Kiwi, apple, pineapple, lime and orange juices with rum, orange curacao, lemoncello, and orgeat with a couple dashes of bitters. I garnished it with a seaweed Godzilla, pineapple spears, and a flaming 151 float on a slice of lemon. It tastes pretty good and packs a monster-sized punch.”

Talk about a little somethin’ to take the nuclear edge off! First round’s on me! 🍹🦖💥

Ralph and I saw Godzilla: King of the Monsters, so you better believe we’ve got a big, juicy, turgid new episode of the Monsters Conquer the World podcast ready and waiting for you! We’re on the Google Podcasts app now, so you can’t escape us! We’re everywhere!  But in a cool, fun way. Like cheeky prankster ghosts or helpful, centipede-eating spiders.

We dig into the great, the good, and the uh not-quite-as-good aspects of the film. We go frickin’ spoiler crazy starting at 14:50, so you’ve been warned! Ralph is as insightful as ever, but there is also a non-zero chance he may hail from a parallel dimension.  We also wax philosophical on the World’s Strongest Man competition, cinematic treasure Jason X, and  indulge in some extended Bradley Whitford appreciation.  Either hit us up on your pod-catcher of choice or click below and SMURSH that play button:

Digging it?  Liking it?  If yes, be sure to subscribe, rate us, tell your friends, whatever you can do! Anything you can do really does help, and you taking the time to do that means the (Monsters Conquer the) world to us.

Just got home from Godzilla: King of the Monsters.  Here’s my spoiler-free micro-review:

If you are reading this I can all but gurantee you will have a shit-ton of fun seeing this bad boy in the theater.  There is so much to unpack here, gang.  Fuller, deeper, spoiler-ier thoughts and content are on the way (after at least one more viewing 😉 ). Until then, check out this actual footage of me watching the movie:

Holy shit!  A full-blown, for-realsies podcast episode! I (a monster movie fanatic) yak with Ralph (a kaiju-curious new guy) about Ghidrah, The Three-Headed Monster! I’ve got the trivia nugs and industry secrets, but Ralph’s fresh eyes see a thoughtful, deeper meaning in the mayhem! Plus we frame the subs vs. dubs debate with the timeless classic Hercules in New York, reflect on the heart-wrenching father-son drama of A Goofy Movie, channel the wandering spirit of Don Knotts, get FUCKING PSYCHED about Godzilla: King of the Monsters, and more! Open the link below, slap that play button and join us!

Like it? If so, SICK! We’re gonna do more! You can find us pretty much anywhere you get podcasts (the iTunes store, Spotify, Stitcher, and coming soon to the Google Play Store). Bon appetit!… for your ears?!?!

So the monthly reviews haven’t exactly been uh, monthly in a while, have they? A solid six months of the hiatus (starting last July) I can pin on getting, struggling with, and moving on from a job that was not a good fit.  The months after that are on me: adjusting to a new job, trying to make time for my people, balancing my other creative endeavors, and wrangling my stupid trash brain all left me without the normal level of chutzpah (and just, you know, time) I need to crank out reviews for your brain and eyeballs.

That stuff’s all true and accurate, but I couldn’t put my finger on why the holdup went on for so long after I worked out the job stuff.  Why have I had blogger’s block? The big reason hadn’t dawned on me until VERY recently: IT’S BECAUSE I’VE BEEN SUBCONSCIOUSLY PUTTING OFF REVIEWING THE SECOND TWO GODZILLA ANIME MOVIES.

I wasn’t exactly crazy about Godzilla: Planet of the Monsters, so the prospect of two more full feature films in that world didn’t have me champing at the bit to do more watching and writing.  I’m the one fucking bizarro-world film fan that would rather write about stuff I love than dunk on shit I hate (which to be fair, I don’t hate PotM, just its cruel narcissist protagonist). Big ups then are in order for friend of the blog Ariccio, who 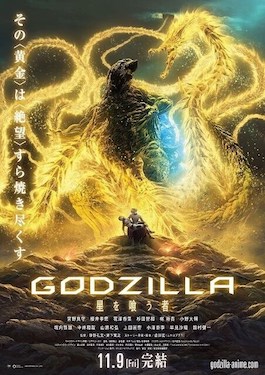 graciously hosted a stream of Godzilla: City on the Edge of Battle and Godzilla: The Planet Eater.  Powering through them both on my own wasn’t something I looked forward to, but knocking ’em out with a bud was a pretty fuckin’ fun afternoon. It also helps that the movies genuinely get progressively better!

Since both sequels were handled by the same creative team as Planet of the Monsters, and since they all collectively tell one big, over-arching story  in the same unique world, I’m rolling my reviews of the two movies into one slightly lighter than normal article. A lot of the behind the scenes/deep dive stuff I normally do was already covered in my PotM review, anyway, so there’s just less junk to ramble about. That said, there’s still plenty of junk to ramble about! Put on your spacesuit, slather yourself in bug-dust, and pray for the second coming of Ghidorah, because we’re finishing this fuckin’ trilogy!

END_OF_DOCUMENT_TOKEN_TO_BE_REPLACED

ULTRAMAN LEO COMPLETE SERIES ON BLURAYApril 13, 2021
Point both of your Eyes of the Lion at this Ultra series! 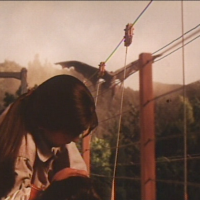 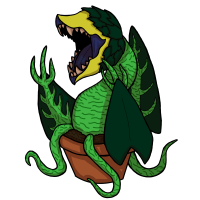